The relationship between poetry and painting is a long and distinguished one. My interest is not in poetry which describes a painting or painting which illustrates a poem, but rather in the ways in which poems and paintings can work together in a manner which is autonomous but also capable of working in synergy.

The above is taken from Tom de Freston’s introduction to his latest book The Charnel House, where the painter himself outlines his own working definition of ekphrasis. If paintings and poems are to have a responsive relationship, Freston says, they shouldn’t merely function as descriptions or re-phrasings of the other form. This definition updates the ekphrastic tradition, turning it from something more formal to something organic and modern.

The Charnel House is a book of poems and illustrations. Thirty-seven contemporary poets have written verse responses to a series of paintings by Tom de Freston, in a refreshing reversal of the much more common illustrated poetry book, where the words come first and the images as a later accompaniment. As Freston explains in the book’s opening, a figure with the head of a horse, brought to life from Picasso’s Guernica, took hold of his painting practice and became a long-term project. The paintings, he says, felt like ‘fragments from a world, in which the horsehead was a central protagonist.’ Freston’s striking use of the word ‘fragments’ here brings to mind Walter Benjamin, who on the subject of translation between languages – and one could usefully see words and images simply as different languages – says: ‘… both languages (like fragments of one vase) may be recognized as fragments of a greater language.’ The presiding impression left over from spending time with this new collection is just that, the creation of ‘a greater language’, made up of images and words together.

The history of ekphrasis encompasses texts such as the Ancient Greek novel (Longus’ prologue to his Daphnis and Chloe from the 2nd century AD) and ancient vases depicting myths, coming full circle with Keats centuries later, and his own meditation on ancient vases and their ekphrastic methods, with his Ode on a Grecian Urn. In W. H. Auden’s later 20thth century poem Musée des Beaux Arts, the poetic gaze is turned halfway through towards the painting that prompted its thought-process, ‘Landscape with Falling Icarus’, attributed to Breughel. This poem is the layered result of a series of ekphrases, since the myth of Icarus, found in Ovid’s Metamorphoses, is repositioned as a tiny detail – a splash of legs into sea – in the background of a landscape painting, and then returned to words again by Auden, whose poem reflects on the smallness of Icarus in the composition of the painting, and what this says about the role of suffering, and of myth, in the world as a whole. 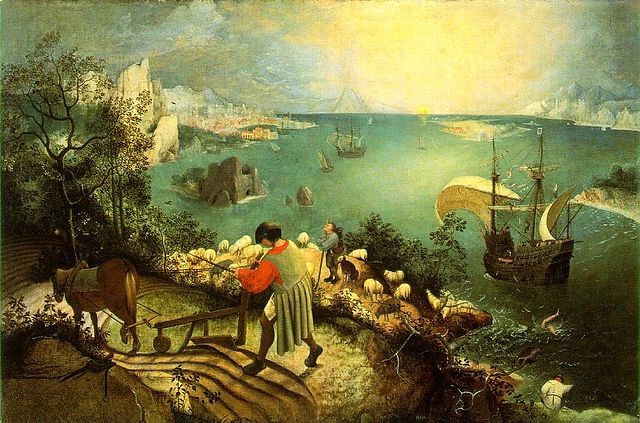 This more contemporary example is useful in the context of The Charnel House because Freston’s final project is equally rich in its layers of receptions. His horse-head, taken from Picasso’s famous painting, is recast in new paintings of his own imagined scenes, and these are then reinterpreted by the contributing poets. Freston finally has selected lines from these resulting poems and implanted them into his paintings like captions, so that what appears in the book is a kind of cross-sectional view of the artistic process; the interpretations across mediums are x-rayed in full view, becoming an essential part of the finished article.

As Freston himself says, the ekphrastic tradition is ‘long and distinguished’, but The Charnel House manages to both overturn and comment upon it. What the book does differently is not only to bring both sides of the ekphrastic coin – both forms – together in the form of a beautiful, bound object, but also to create an indefinably potent space between them, a place where the effect really takes root. The book deliberately cedes control to the reader, the viewer, to make their own individual meaning from the twofold experience.

In the world, words and images live alongside each other everywhere. Sitting on the train with a book, the reader looks up at a stranger across from them, or at the image of the outside framed in the carriage window, then back down to the phrase they left in their book, weaving the two experiences together in a glance. All online content is a constant jostling overload of relational captions and pictures. The Charnel House refines the relationship between words and images to a focal point. As a whole, the collection becomes a sustained and thoughtful questioning of the purpose and possibility of images and of words. It asks itself questions throughout, as all good paintings and poems seem to do.

There has always been a meta quality to ekphrastic art (how could there not be?). It is inherent to the form: a piece of writing or an image discusses the process of its own making, the art of artifice and influence, and the self-consciousness that imbues all art with its own maker, and their own doubts and questions. While reading The Charnel House I entered into this richly complex and wonderfully inconclusive discussion. The solidly academic word  ‘ekphrasis’, seemingly irrelevant outside of scholarly discourse, is recast here as a reminder that all art is about itself and its place in the world.

Indeed, the book’s title recalls Picasso’s painting of the same name, The Charnel House, although Picasso didn’t actually give it that title himself- it only became popularly known as such later. Perhaps Freston’s title reflects this fact, since the book’s process involved thirty-seven participating poets giving a name to their experience of his paintings. Among these are more established as well as newer poets such as Jacob Polley, Helen Mort, John Glenday, Declan Ryan and George Szirtes, to name but a very few.

Reading through the ‘Ramblings’ section on Freston’s website it becomes clear that he is a highly literary painter, in the sense that his visual process sits on a backdrop of words and ideas. In his entry, ‘Some thoughts on process’, he unpicks the unspoken questions that lie in the paint, revealing his intellectual engagement with the conceptual sphere surrounding the work. There is a real wordiness to his engagement with the painting process, as he describes the way in which his initial intention upon starting a painting can transform while he paints, and indeed be transformed by the painting and its own mysterious direction. When talking about what he calls ‘the poetic process of painting’, he uses the post-structuralist Roland Barthes’ analogy of ‘author’ and ‘reader’ as a way of talking about himself as a painter. He explains:

A shift of a line break or a laying down of a new colour can throw up a new problem which might eventually lead to the entire form or composition of a poem or painting totally changing.

The resulting images in the book are a collage of styles, with painterly sections placed alongside computer-enhanced and more graphic drawings, and they also contain lines and phrases from the poems, dotted across the images. These repetitions – experienced both in the poems and then again inside the images – carry one poem across to the next, stringing them together in a way that mimics the echoes in the images.

Leafing through the collection feels like walking down a dark street, looking through lit windows on to a series of scenes, then catching the sounds of voices – the poems themselves – as you pass. The pages of the book, which typically have a poem on the left page facing a painting on the right, become like rooms. The combination of poem and image give each spread a three dimensional quality, suggested by Freston’s very spatial paintings, so that the reader’s experience is given four walls. The book becomes almost claustrophobic as the echoes in the paintings accumulate; there is something deliberately disorientating in the growing familiarity and also constant strangeness of the illustrations and their accompanying poems.

It is the way in which the combination of the two forms affects the reader’s experience that is most interesting. The immediacy of the image, its initial and spontaneous effect, is poured through the slower process of the poem, like milk through muslin. As Freston says, they are ‘autonomous’, but in combination they produce inexpressibly particular effects.

A poem that particularly stood out was ‘Look it in the mouth’ by Toby Parker-Rees, as a short little stab that cuts through the process of the book, voicing something subtle and unsaid (that seems to be) about the fidgeting feeling that comes with trying to consider visual then lyric art, form opinions and then articulate them:

Pull out of it – pull out & pull apart

& watch the shadows settle on the ceiling.

It’s quite unwise, you’re thinking – so you start

Some of the most successful illustrations are the ones that confront the collection’s self-conscious art. For example, the image that sits alongside Parker-Rees’ poem above shows the recurring horse-head character looking at paintings, one of which is a very clear Guernica-esque Picasso. There are Van Gogh sunflowers in the corner of another image, and gallery spaces are intimated in more than one illustration, boldly positioning the viewer into the meta-realm of the book.

From a critical perspective, the collection eludes the usual approaches to either paintings or to poems. This is perhaps its greatest strength. There are such established points of interests and modes of talking when it comes to poetry, and to, a lesser extent, painting, when the two forms are on their own. But when the very point is to discuss their effect together, as The Charnel House asks that you do, these discursive perimeters break down. Too often with any kind of art, visual or linguistic, critical conventions are used not only to explain the art – if such a thing is even possible to begin with – but also to explain away art. There is often a pleasurable but inconclusive circularity to opinions about art; forming them and articulating them. The trick perhaps is not to shy away from this fact, or find ways of masking the confusing truth by pretending to form assertions.

When reading or looking, the thoughts that occur at the time, and afterwards, rarely reach a definite stopping point, although much current cultural criticism would have you think that art can be a converted into coherent conclusion. When something is unstable, original, entirely individual, and, above all, alive as an experience, we are all forced to engage more and think a bit harder, or even think less, but above all not fall back on to reliable previous perspectives. The book asks me not to form a solid opinion, and happily I won’t.

One of the contributing poets, John Glenday, reflects on his experience of writing poetry in response to painting. He boldly admits the uneasiness within the relationship, which is never simple but always powerful:

Any poem I have written which appropriated an image as a starting point has never ended up as a tribute to that image, or even an interpretation of it, but rather an escape from it. The finished poem is the desperate trail I’ve left fleeing the scene.

And therein lies the excitement of The Charnel House: it is a book of artistic escapology.