Although Tom de Freston refers to his book, The Charnel House, as ‘a poetic graphic novel’, it’s a hybrid book which defies easy categorization. It’s a poetry anthology; it’s a series of paintings turned into comic strip format, complete with text; it’s a moving and profound multi-authored novel. The Charnel House shares literary and artistic territory with Spiegelman’s Maus, or Moore/Gibbons’ Watchmen, or Briggs’ When the Wind Blows. It also shares some of Samuel Beckett’s tragicomic preoccupations.

The Charnel House origins lie in a series of paintings Tom de Freston has created over the past few years, featuring a horse-headed human hybrid character; a character which Freston freely admits he appropriated from Picasso’s Guernica – and which also has similarities to the horse head in Fuseli’s The Nightmare. InThe Charnel House, Freston has provided horse-head with a plausible world and a coherent narrative. The Charnel Housenarrative follows horse-head through the various stages of its existence. 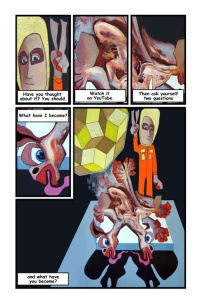 The effectiveness of Freston’s imagery is due to the careful juxtaposition of the terrible and the harrowing with the everyday. Scenes of mutation, mutilation, torture, sadness, death, sex, love and lust take place in various domestic settings; the action is constantly framed by windows, or lit up by bare bulbs, or reflected in mirrors, thereby making the reader culpable by being vicariously voyeuristic. 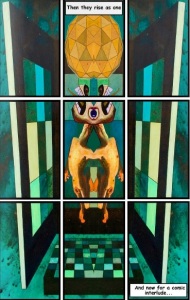 The startling, often shocking, imagery is set out on the pages in classic graphic novel style and the accompanying poetry is positioned to complement the art that inspired it. The Charnel House challenges the reader’s engagement with both subject and subject matter by the employment of ekphrasis, a technique usually defined as ‘a literary description of or commentary on a visual work of art’. The Charnel House explores themes of identity and memory, love and loss, by presenting twisted and confused versions of the universal and the domestic; of reality and the nature of perception; of cruelty and suffering, and the relationship between the past, the present and the future. 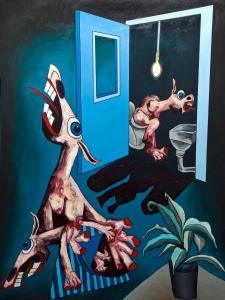 Contributions by 37 poets, each inspired by the original paintings, are set on the adjacent pages to the illustrations, and the graphic novel format and ekphrasis create a narrative. Mythology is used, historical and notable artworks are frequently referenced, as are images of modern-day political atrocities. This is where the real power of Freston’s use of ekphrasis becomes evident. Although horse-head is constantly on the cusp of revelation, of understanding exactly who and where it is, he/it is never able to actually achieve enlightenment. 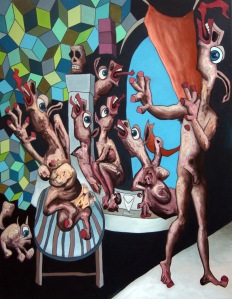 But The Charnel House, despite its name, is not all sturm und drang, screams and shrieks, nihilism and existential angst; a major theme of the collection is identity, and the preoccupations of the self. It’s intense, dark, emotional, surreal, yet deeply personal and simultaneously universal. Admittedly, it’s a very tough collection to get through, but its content is immensely rich, and the poems and the illustrations are so moving that it’s worth the effort needed to read the whole work. It’s an incredible collection. 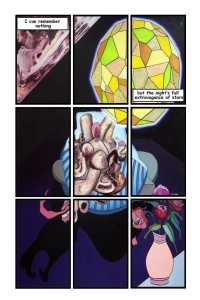 The Charnel House is a very experimental and incredibly powerful anthology of poems and illustrations that explore the relationship between mind and body, reality and dreams, passion, lust, and love. It’s a deep, dark, emotional collection. Ultimately, The Charnel House is a work of great depth and imagination.

The Charnel House is available as a free e-book and as a hardback published by Bridgedoor Press.